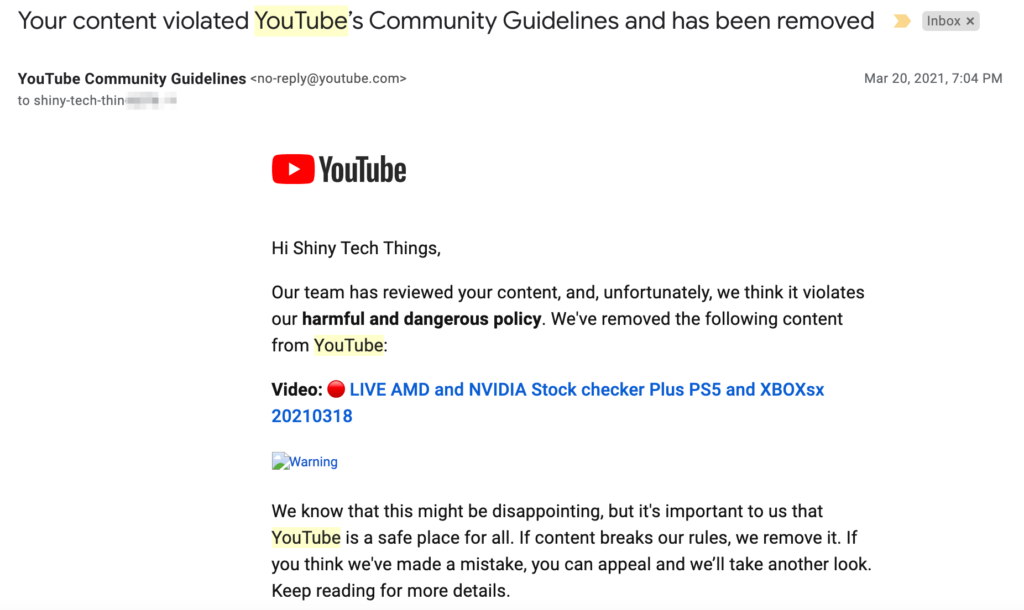 Hardware Scalpers attack YouTube Channels – Will you be next?!

UPDATE – YouTube did restore my channle but I noticed that the community posts were missing for a day or so and also monetization doesn’t seem to be working yet but it shows is enabled and working🤷‍♂️ So waiting for YT to respond on this issue.

Over the past year and a half I have built up a respectable YouTube channel called “Shiny Tech things” where “we tech things seriously”. Recently on the Saturday night of March 20, 2021 I had a video flagged under the “harmful and dangerous” policy. Video: 🔴 LIVE AMD and NVIDIA Stock checker Plus PS5 and XBOXsx 20210318 Is a video in which I am live streaming 24 x 7 We help people find graphics cards and processors and even game consoles Using a bot names “Street Merchant”. I also had several videos showing how to install, configure, and run your own bot yourself on Windows as well as on macOS. All I have produced is clean video content to assist people with technical issues and shared the nerdy things I have done over the years. I have been threatened by scalpers on various online platforms but never would have thought that I would have my channel removed because of this. Now it’s 100% impossible for me to say for sure it was a scalper ring because YouTube didn’t provide me any log files for me to look at and doubt they ever would, however doing what I do in the world of I.T. I deduce things to determine a root cause and then find a way to fix the issue. I have deduced because of the threats online that I was targeted since I never release any type of harsh content as all of my content I feel should be safe to watch in front of your own children as I would watch it in front of mine.

This brings to the surface a much MUCH bigger problem with YouTube as a platform.  I suspect that YouTube does not use any account history telemetry to be able to determine if there is any foul play When a video and or channel is being reported for violating any YouTube policies.  I do agree that they should take down the contact immediately just in case it truly is not supposed to be on their platform to prevent any further damage and then review it at a later date. What I don’t agree with is when someone’s channel is removed it causes collateral damage that has nothing to do with the channel but YouTube’s actual platform. I will not go into this in further detail unless I have to take legal action to get their attention to review the channel however YouTube is currently getting exploited by this particular hack and my channel is evidence this can be easily done even when my channel has never had a single strike or warning and had over 1000 subscribers and plenty of watch time. If you would like to help please spread this awareness by sharing this post as well as retweeting my Twitter post.